Things I need to do differently in 2014:

No over or  under planting. Just stick to one thing per row.

No more tomatoes from seeds.

Things I didn’t do, based on last year’s lessons were that I didn’t plant things that the whole family hates (parsnips and radishes!) and I didn’t do any under planting.

Unfortunately, this year I learned not to pull up any unfamiliar weeds: there is a very sad reason for why there are no lupines growing this year. Come back lupins…come back!

Ruthless weeding is the reason why there is only ONE CHOCOLATE LILY this year. 😦

1. An emphasis on acid awareness. I planned to do a lot of pH measuring and adjusting this year. I used pH  paper, a pH meter and what I learned is that nothing seems to make much difference. I AM going to spread a lot of lime this winter as all the Pacific Northwest garden guides recommend that to counteract the acidity of the rain, but I am not going to try to measure pH any more.

2. The four year rotational plan. Overall, this was not a great gardening year in many respects. My first few rounds of seeds all rotted or were eaten and in the end my garden started late. Unlike last year, I wasn’t begging people to take my kale away, because I didn’t have much.

The big plan for 2011 was to plant veggies using a four-year rotational strategy, suggested in “Gardening in the Pacific North West”, by Carol and Normal Hall. According to the plan, the plots are rotated each year to meet nutritional needs and to balance out pH, early and late plantings etc etc.  This is what really happened: 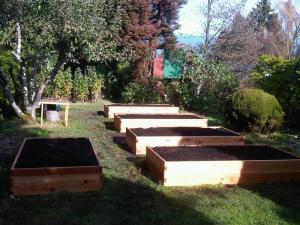 Raised beds installed in the fall of 2010 in the back garden. The apple tree is on the left, behind the fifth box.

Plot A: This was supposed to be Brassicas: broccoli, kale, leeks, kale, swiss chard and kale. What really happened: three rows of kale, two rows of carrots, two row of parsnips, four rows of beets and a row each of lettuce, spinach and radishes. The beets and radishes were fine, but the carrots didn’t thrive and I only ended up with four GIGANTIC parsnips. At the end of the season I also put in pumpkins and lettuce and it all got overcrowded.

Plot B: Root vegetables: beets, parsnips, potatoes, carrots.  What really happened: potatoes. The potatoes were the winners last year. Not only did we get about 40 pounds, but the kids are still telling our friends how much they enjoyed digging them up.  This bed was planted with a winter garden in August, but only the cilantro, arugula and kale really thrived. The spinach got eaten and the onions and corn salad never made an appearance. Winter lettuce didn’t grow well….

Plot D: Pumpkin, squash and green beans. Was this the plan? In real life this bed was home to leeks, brussel sprouts and swiss chard, all of which grew all winter.

The bed on the left of the photo is going to be for edible flowers (calendula and cornflowers) and maybe some herbs.  What really happened: chives, onions, lettuce, radishes, spinach. This is planted with chives, nasturtiums, parsley and garlic for 2012.

This year tomatoes will be grown in containers only, and in their usual place will be corn. The rhubarb has been moved this year below the lilac bush.  The rhubarb had kind of a traumatic experience last fall so I hope it survives.