I don’t normally think of sunlight and warmth as mutually exclusive, except for yesterday, when I had to decide which of those were the most important for my plants. We had some fabulous sunshine, but without the usual winter cloud cover, the air was very cold (5 degrees celcius).

I ended up choosing sunlight, and pulled back the plastic on the slug biodomes so that all the plants could get some UV. This released all the warm air, and I worry that I put the plastic back too late for the air inside to warm again. I also watered the plants because for the first time in two weeks, the soil was getting dry. I hope that they won’t freeze…

This weekend I also put the hoses away and turned off the water at the back of the garden so that it doesn’t freeze. I pulled the hoses out into the driveway and then wound each of them up, then connected the two ends (so that the water doesn’t leak everywhere, and tied them up with a few bits of twine. They are now out of the way and in the store room until spring. 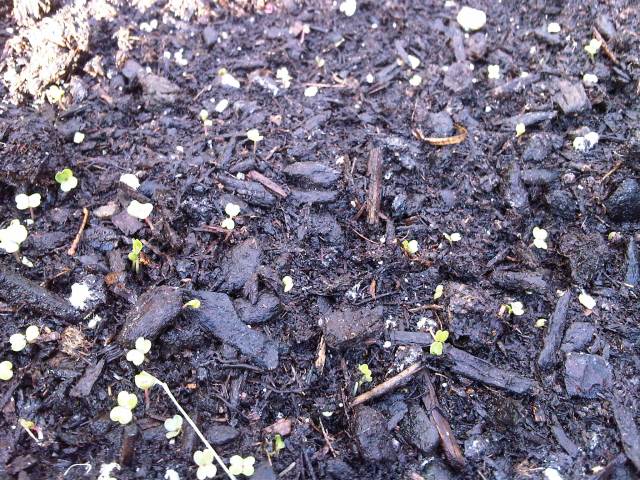 Arugula sprouts in the biodome…

This blog is my online journal to keep track of what is going on in different parts of the garden, different times of the year.
View all posts by Chrystal →
This entry was posted in Uncategorized and tagged arugula, biodome, slugs. Bookmark the permalink.