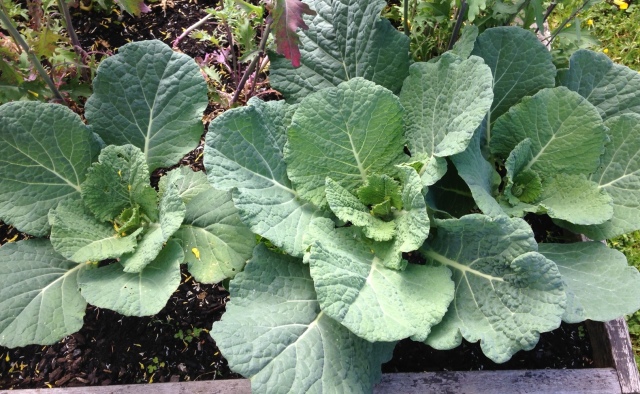 Savoy cabbage – these are supposed to be dense heads.

This year I’ve been trying to keep things under control by harvesting vegetables early. When they are small. This strategy has been working well, and as a result we’ve been eating at least one thing from the garden every day: lettuce, arugula, kale, chard, cilantro or cabbage. Cabbage is the unexpected winner this year, and we’ve been eating it two or three meals a week for the last three weeks. I’ve been harvesting the largest leaves, then within a week they’ve grown back. This is the cabbage I mentioned a few blog posts ago that was supposed to produce dense heads; this works just as well for us.

Arugula has also grown well and almost every day I have an arugula salad for lunch, or I pile it in sandwiches, or try to hide it under tomatoes and bocconcini. Arugula is what The Man describes as “too much of a good thing” and he has requested that we “dilute it down” a little. The arugula is starting to bolt and the leaves are getting bitter, so I have been pulling up entire plants at once rather than selectively harvesting leaves.

The other thing I am learning this year is “you don’t have to sow all your seeds at once”.  My greenest-thumbed friend wrote about Starting Peas (http://partygreen.ca/2014/05/07/starting-peas/)and I had an “Ah ha” moment. I realized that I should have done the same thing – planted one row at a time  to extend the harvest. Check out my peas (Alderman variety) left of centre in the picture below, which are now all crowded together and have started to fall over. The same thing happened with the cilantro; it sprouted, grew like crazy, peaked and started to go to seed at once, and was harvested last weekend for pesto. No more fresh cilantro in the garden now (but lots in the freezer).

This picture was taken last week, and already things have changed: the cucumbers, pumpkin, squash and fennel have sprouted, filling in all the empty spaces.

Most of the seeds I planted in the last two weeks are thriving, others are not. I planted lettuce and basil over two weeks ago, and they sprouted within a few days, and then stopped growing. I mean it – the basil sprouts are still less than a cm tall and the lettuce hasn’t grown at all. On the other hand, everything I planted a week and a half ago is already sprouted and growing strong: I planted four giant winter pumpkin seeds  in the same bed as the cabbage, and planted too many sweet slice and natural pickling cucumber seeds beside the peas. Beside the chard I planted gold rush zucchini and a row of Florence fennel. This last weekend I added a few more rows of basil and freckles lettuce in the last few empty spaces.

Borage and echinacea (cheyenne spirit mix) were planted last week under the lilacs and with the sweet peas. One of them has already sprouted. Will find out soon which one that was….

3 Responses to Planting (and eating) update