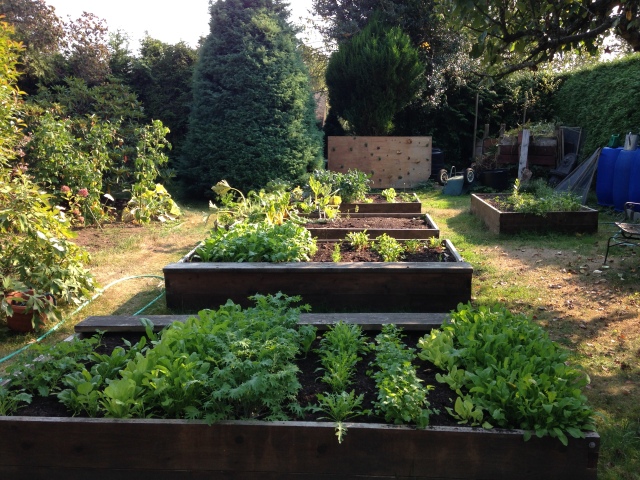 Two garden boxes in the foreground. The former climbing wall in the background is being used to block out the view of my neighbor’s “project”.

For some reason I keep thinking that gardening season is over and so have been neglecting my garden. Luckily the warm fall soil and all the rains have taken care of things, and the veggies have been growing like crazy. Every time I walk to the back of the yard I am surprised by how many things are waiting to be picked. I return to the house with handfuls of beans, radishes, zucchini, cucumbers, cilantro, kale and lettuce.

This was a particularly good year for cucumbers from a taste perspective, although they were not much to look at. I planted both pickling cucumbers and “sweet slice” cucumbers, although I think only the pickling ones grew. I think I was supposed to pick them when they were small and fresh, but instead left them too long and ended up with dozens of orange balls: fruits that were about three inches long, perfectly round, with a tough yellowy-orange skin. They looked like squash, but when the skin was peeled off and sliced, the flesh was firm and cool and definitely tasted like cucumber.

We finally picked the honeycrisp apples off our new tree on the weekend. Although the tree is only still a sapling, it produced several large crisp apples. Neither the new pear nor the new plum produced anything this year.

The fall kale (planted in august) is also doing well and we’ve been eating it lightly steamed or sauted while the old kale just continues to grow. As one of my friends said last weekend “Kale just gets bitter as it ages…like me!”. Yeah, that made me laugh. We will end up eating the aged and bitter kale in the winter, when there are fewer fresh vegetables around. Believe it or not, there are several dutch recipes featuring kale which I will try.

Finally, yesterday I harvested one of the remaining two savoy cabbages and cooked it into a okonomiyaki. Although the idea of a cabbage and seafood pancake may not appeal, I can assure you that it is very tasty and was gobbled up by my people. The cabbage tasted fine, but was a little tough – not just the outer leaves, but the inner ones as well, so I might have to come up with another use for the remaining cabbage.

That’s it for now. I have been typing this out on my deck, covered with a blanket but now my feet and fingers are starting to get chilled…