Ivy rejuvenates the grape vine wreath on the gate

This week I received a letter in the mail from the Metering Support Department of FortisBC asking me to prune the bushes and shrubs from around my meter. Things have really grown in the last months and the branches formed a nice shrine around the meter which must have made access difficult. After some clear cutting, the meter is more accessible and I had a huge pile of greens to work with.

I put a few Forsythia branches inside to see if they will bloom, but the rest of those went into garden waste. The cedar branches and the pinkish sedum blossoms were used to give my planters the Christmas makeover along with greenery and berries from around the yard. For vertical interest I used a holly branch from my neighbors tree (thanks Brian and Sheila!) and branches of cotoneaster. November is still too early to completely xmasize, so I held off on adding the bows, ribbons and the iridescent sparkles until December.

In the summer this pot holds mint. I cut away all the dried branches and added greens. I also moved this to a spot visible from the table so we can watch the planter get rained on while we eat our breakfast. 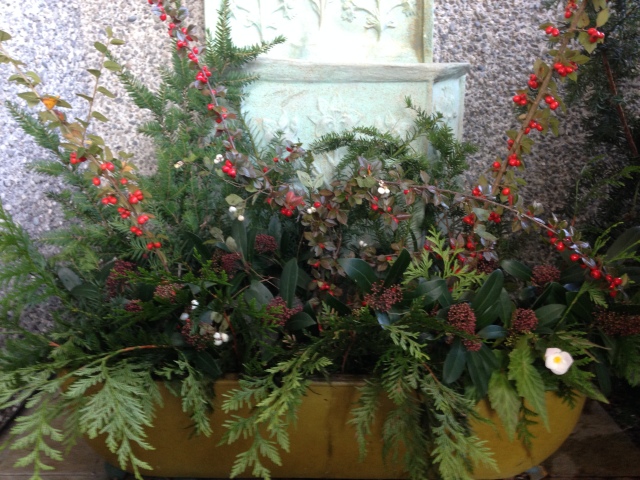 Planter on the front porch. You can see that the begonia (white flower on the right) is still blooming.

While I was out there, I also found that two types of ivy are growing in to the cedars, so pulled a lot of the vines off and wrapped them around my existing grapevine wreath. I don’t expect the leaves to last very long, but the vines will dry and be added to my wreath which was starting to break down.

Work continues in the garden as I am starting to remove many of the stems of dead flowers like black-eyed susans, chrysanthemums and gentians. In some areas I am leaving the dead branches and leaves in situ to discourage the weeds from taking over during the winter. The other thing I am trying to do is remember all the things that I had intended to move – the plum tree, the crowded allium bulbs and the overgrown white tulips. At this point, having pictures of some of those things in bloom is helpful for helping me remember and figure out where they are now.

This blog is my online journal to keep track of what is going on in different parts of the garden, different times of the year.
View all posts by Chrystal →
This entry was posted in Uncategorized and tagged FortisBC. Bookmark the permalink.