Spring ahead, fall down

This is a super-long post about everything that happened today in the garden…lots is going on and I haven’t blogged for awhile so just scroll down to look at photos if you want.

This was the kind of day it was today in Vancouver: sunny with high clouds and a bit of a chill. Pom-pom magnolias!

The much anticipated manure arrived yesterday, so it is probably no mystery how I spent today. We decided to go big again this year and ordered 60 x 40 pound bags = 2400 pounds, which arrived yesterday. Composted mushroom manure is left over from mushroom farming, is easy to spread and does not smell very much. This contrasts with steer manure which is left over from cow farming, has an inconsistent texture, and smells horrible. I don’t really know which of these is better (or worse) for the garden. Although some sites warn against the evils and alkalinity of mushroom manure, Vancouver soil is typically acidic so I think maybe things balance out.

Cryptomeria stump with a few bags of manure.

Last week we finally had our sick cryptomeria removed so that the rotting branches wouldn’t fall on power lines or people. The tree was between 45-50 years old (based on a ring count), and took up too much space and light in the back. I am thinking that the flat stump will be a great place for the beehive this summer. 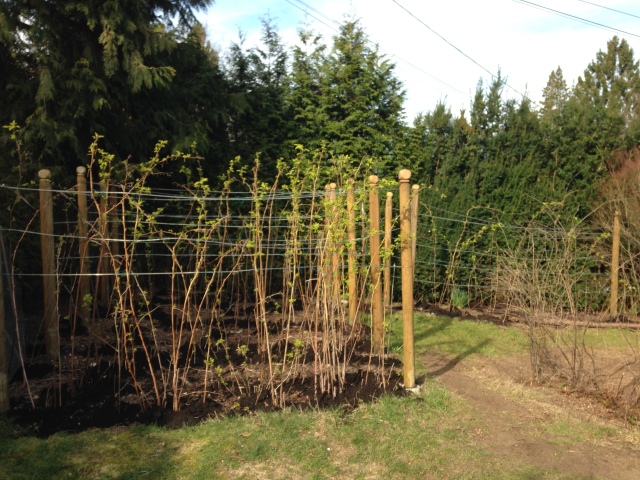 Raspberries top dressed with manure. You can see that the leaves are underway.

Now the tree is gone, the raspberries will have more light. The raspberries on the right side of the photo above received little light last year and yields were poor. I spent most of the afternoon first watering and then top-dressing the raspberry bushes as well as the fruit trees. While it seems too early to water, it hasn’t rained at all in the last two weeks and the dirt was alarmingly dry.

In addition to the raspberries and the fruit trees, I also top dressed the raised beds where the garlic and peas are growing. The garlic planted in October is up as are the first peas planted in February. Another row and a half of peas are planted in the ground next to the favas, but they haven’t come up yet. Although I was planning on succession planting this year (as my friend L3 always does), the entire pea pack fell into a bucket so I ended up having to plant them all. Two rows of favas were planted mid-February using some of the super huge beans harvested from last year’s crop. I also planted an additional 1.5 rows to the south, using “Windsor” variety seeds from West Coast Seeds. This head to head trial is being conducted to determine which seeds are most robust. The primary endpoint for this trial will be the final size of the harvested beans, while secondary endpoints will include the median height of the plants, size of the pods and overall yield per plant. (Ha ha – science nerd humour).

After spreading several more bags of manure around the peonies and filling in some holes in the front, I hit the wall of exhaustion and abandoned my original plan of a bike ride. Instead I sat under the apple tree for about an hour and couldn’t move. You can see the string of lights hanging in the tree. I can’t remember if I blogged about it or not, but I find my back garden super-creepy at night. A few years ago I tried to plant a “moon garden” thinking that all the white flowers would be visible and romantic in the moonlight, but if they are, I wouldn’t know. Last weekend I moved the solar LEDs from the deck to the tree, hoping to make the back garden more inviting at night. They look nice from the house, but they don’t make thinks any less creepy in the backyard. The bottom photo was taken as I was running back to the house….

This blog is my online journal to keep track of what is going on in different parts of the garden, different times of the year.
View all posts by Chrystal →
This entry was posted in Uncategorized and tagged manure, pH, raspberries, spooky back yard, Vancouver. Bookmark the permalink.