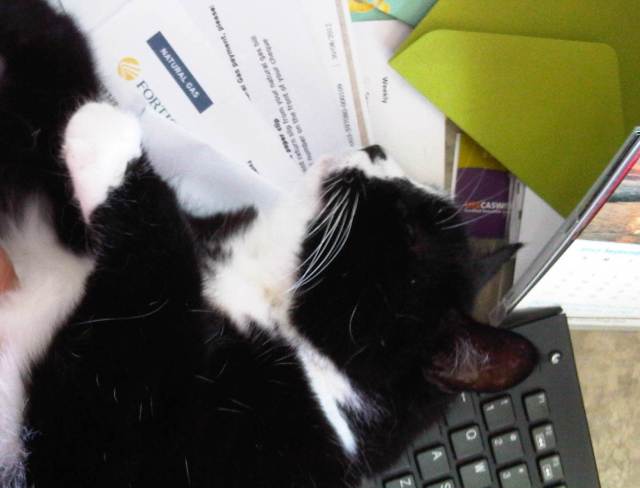 This cat has an important office job, and is far too busy to catch moles.

Early in the season a mole moved into our yard and started to burrow under – and in – one of my garden boxes. I left cat hair near the mole holes in the hopes that the smell of our fearsome cat would scare the moles off. Of course, expecting Miss Kitty to actually catch any of the moles is simply too much to ask of a dignified cat like her.

For awhile the moles were gone, and then they came back, this time near the raspberries. Again, more cat hair and again they went into hiding. Now they seem to have taken over my entire front yard, including the boulevard. Ugh. When they were hidden in the back, I could pretend that they didn’t exist (“mole problem? no….I don’t think so…..”). Now they are in the front, the whole neighborhood can see we have a problem. A big problem.

I have been reading up on ways to eradicate them and have learned several things:

Since we are generally not “yard-crap” people (with the sentimental exception of Gimli, the garden gnome), adding a bright row of stupid windmills on the boulevard is not an option. However, one of my animal-expert neighbors recommended the following product which I just ordered: Sweeney’s 9012 Mole and Gopher Twin Pack Sonic Spikes. According to the product description, the product emits a sonic pulse that is highly irritating to moles and gophers. This sonic pulse penetrates the soil every 30 seconds, and can treat up to 15,000 square feet.

I have going to give my garden-waste bin sharing neighbors each a sonic spike as am early Christmas gift, to prevent the moles from moving into their yards. Delivery date is October 1: I only have to tolerate the moles for another two weeks!!!

This blog is my online journal to keep track of what is going on in different parts of the garden, different times of the year.
View all posts by Chrystal →
This entry was posted in Uncategorized and tagged moles, Sweeney's 9012 Mole and Gopher Twin Pack Sonic Spikes. Bookmark the permalink.