Today was probably not the first day of sunshine this year, but it felt like it. So many things were waiting to be done; I spent most of the afternoon in the back yard shoveling, raking, planting and cleaning.

Manure – yesterday 25 bags of manure were delivered. Apparently not all the bags were sealed properly, so in addition to schlepping the bags into the back yard, I also got to scrape manure off my driveway. I used the manure from the open bags to top dress a few beds – luckily the manure is fairly “mature” so it is quite dry and spreads very easily. I added three bags to box 5, and used a trowel to dig the manure under and mix it with the dirt. While I was doing this I removed any weeds that came up.

Planting box 5 – although it is early, I planted three rows of space spinach, three rows of early season arugula and sowed a patch of early season greens. This bed also has some chives coming out and a sorrel plant. I’ve ignored the sorrel all winter and it seems to be thriving. If I was thinking, I would have harvested it BEFORE covering it with manure. Now it will have to wait.

Replanting favas – the favas in box 2 are suffering and only about five plants survived winter. Since I had a few extra packets of seeds (and the seed packets were wet- boo) I planted them all. I then spread a layer of manure on top.

Transplanting a rose – a friend gave me a rose from her garden. I noticed that it is starting to get leaves. I put it in a sunny spot under my lilac and behind the white bleeding heart.

Planting wild-flower seeds – I raked, sowed and re-raked the area under the lilac and the area under the apple tree. Both areas are currently bare so hopefully I can grow some flowers there before the weeds take over. The packages say “plant after last frost” so I hope it isn’t too early.

Removing the slug biodomes  – yes! They are finally off, and the spinach, kale and lettuce are starting to grow!

By this point in the day, the fun was just getting started. Quick story – when we lived in Toronto, we had a lovely 92 year-old Hungarian landlord called Mr. Csok. Our building was over 100 years old, and the basement was a maze of old horse stalls that had been converted into storage rooms, offices, and who knows what else. One day I was in the basement, and Mr. Csok showed me a room that was full of pieces of wood. He picked up an unremarkable piece, held it out to me and said “This piece of wood is decades old. It will never grow again”. So I looked at the wood. Nothing happened. It didn’t seem special. It wasn’t even beautiful. I kept staring at the wood waiting for something to happen, until he put it down next to the rest of the pieces of wood and said “All of it – very old wood. That is why I keep it”.

Someone with a very similar mentality has been stashing similar pieces of wood and other crap behind our compost bin. Today I carefully lifted each piece out and put it in a big pile on the lawn. The wood was all rotted and full of rusty nails (hello tetnus!), PVC pipes were all drilled through or broken, there was a huge piece of rebar, 25 plastic flower pots, rusty wire, a chuck of plywood, part of a balcony railing, what appears to be a few cabinet doors. I was just happy that I didn’t find anything truly unpleasant back there like a dead body or a rodent hotel. Just as I finished removing everything, two boards on the back of the compost bin fell off, so I added those to the discard pile and put the plywood back in place to block the hole.

Wine – after all the hard work, I rewarded myself with the first outdoor glass of the season. A most productive day indeed. 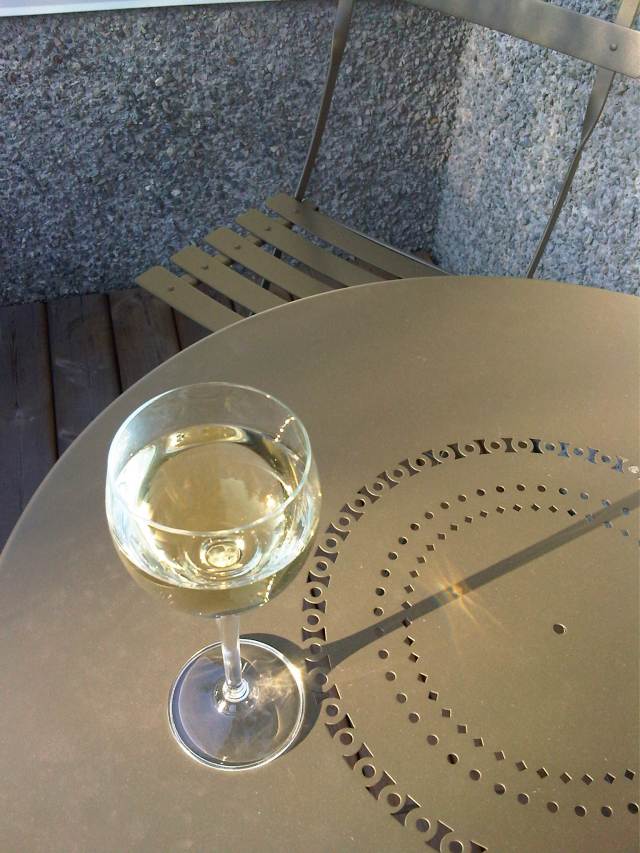