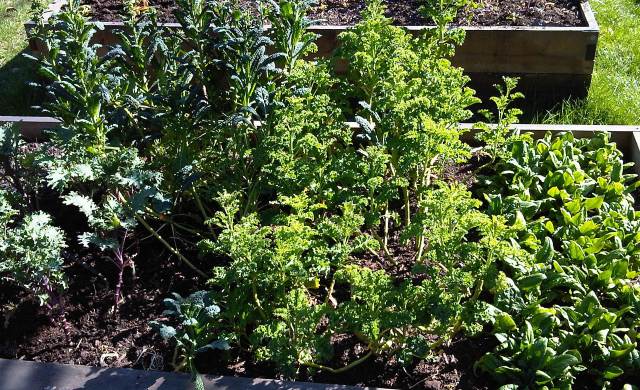 The fabulously warm and spring-like weather means that the over-wintered vegetables are growing fast. The kale has almost reached the “sustainable” phase, which means that we can eat several large servings of kale each week without decimating our supply.  While kale isn’t a vegetable that most people get excited about, all the members of our family tolerate it, so I end up adding it to everything. My only kale caveat is that I need to eat it cooked; raw kale does evil and unmentionable things to my digestive tract. The spinach is doing surprisingly well and although it isn’t yet growing fast enough to pick every week, we did have a huge spinach salad tonight.

I finally planted my potatoes and selected the kennebec variety instead of the sieglindes which failed so miserably last year. Before planting them in bed #4 as planned (yay, I am sticking to the plan!) I pulled up the overwintered kale and transplanted the Swiss Chard to bed #2. Two bins of dirt are set aside to make mounds once the potato leaves emerge. I worry that I may have planted the potatoes too deep – almost 18 inches. 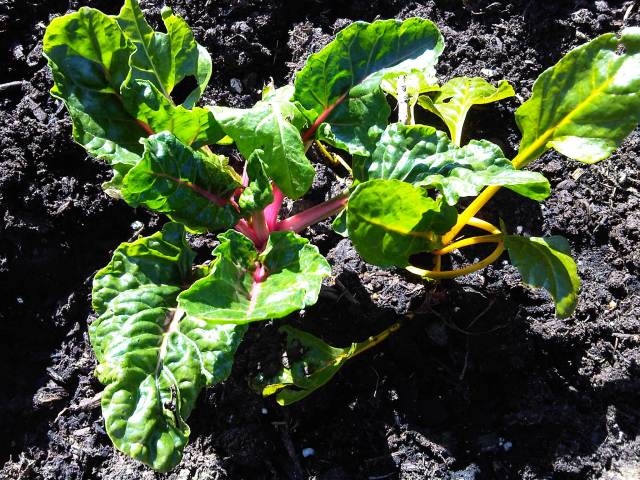 This chard, which did poorly all last year, started to grow again. I have high hopes…

Finally, I planted three rows each of celeriac and three types of leeks in a flat (below). The celeriac was planted mostly as an experiment: it has a 55% germination rate, takes 20-30 days to germinate and was supposed to be planted 10-12 weeks before the last frost. Leeks usually do well, and since we eat a lot of them, I was going to plant many. I took the picture so that when the stupid labels fall off I will still remember which species of leek is which, as if it makes a difference.

Celeriac and leeks, planted in a flat (three rows of each).

Last fall I blogged about the tomato seeds that my friend Madame Z gave me. Today I also planted those in a flat: Tigrella (2 rows), Una Hartsock (2 rows), Cheesmanni (2 rows), Odd Shape (pink) (1 row), Red Currant (1 row), Sarah Goldstar (2 rows), White Currant Cherry Tomatoes (2 rows). Hopefully, I will have better luck with these ones than I usually have with the spindly things I grow.

Tomorrow is about flowers: white cosmos and white poppies in the front and several varieties fragrant sweetpeas in the back. Although I could start the cosmos inside, their chances are better if I seed them outside. I also obtained some seeds for a rare and extremely potent catnip which I intend to plant tomorrow.

Also tomorrow: add soaker hoses to raspberries. Re-tie some of raspberry canes and remove the ones that didn’t survive the winter. Remove lauryl. Weed. Weed. Weed. Harvest kale for dinner. Pick up more large branches from rock garden. Figure out if maggots in the compost bin are necessarily a bad thing.

This blog is my online journal to keep track of what is going on in different parts of the garden, different times of the year.
View all posts by Chrystal →
This entry was posted in Uncategorized and tagged catnip, potatoes, seeds. Bookmark the permalink.