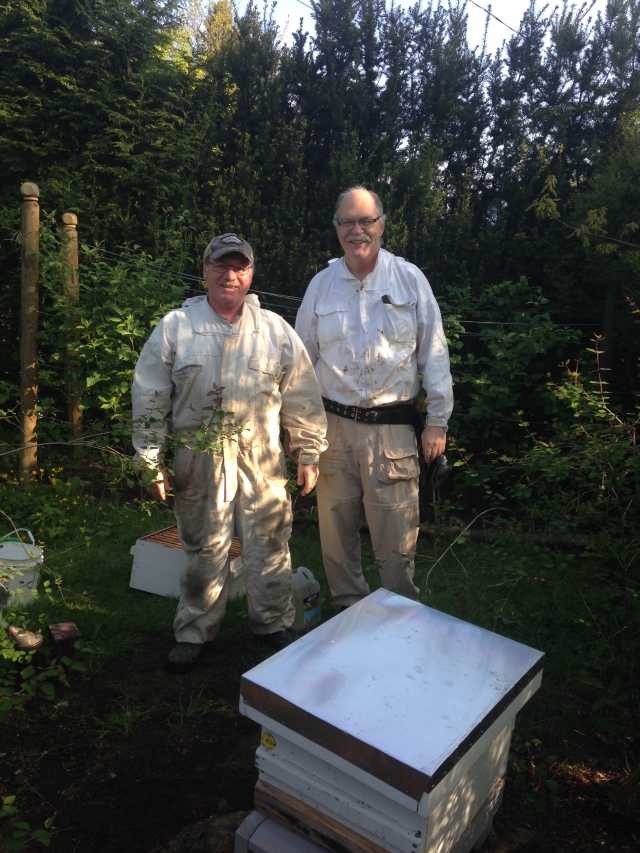 Art & Bryn behind the queenless hive

Early this morning Art and Bryn from 3B honeybees dropped by for a hive checkup. After their last visit two weeks ago, Bryn reported that the hive seemed to be doing poorly, with few larvae in the cells. Sometimes as the weather gets warmer, the hives really come to life, so they decided to wait to weeks to see if things improved. Unfortunately, this morning there were fewer bees and again no queen, so they’ve concluded that the queen is dead. There are still lots of bees in the hive who are gathering pollen and storing honey, but without a queen, their numbers won’t grow (which is the whole point of hosting a hive during the summer months). Although one of the workers has started to lay larvae, these will be drones. 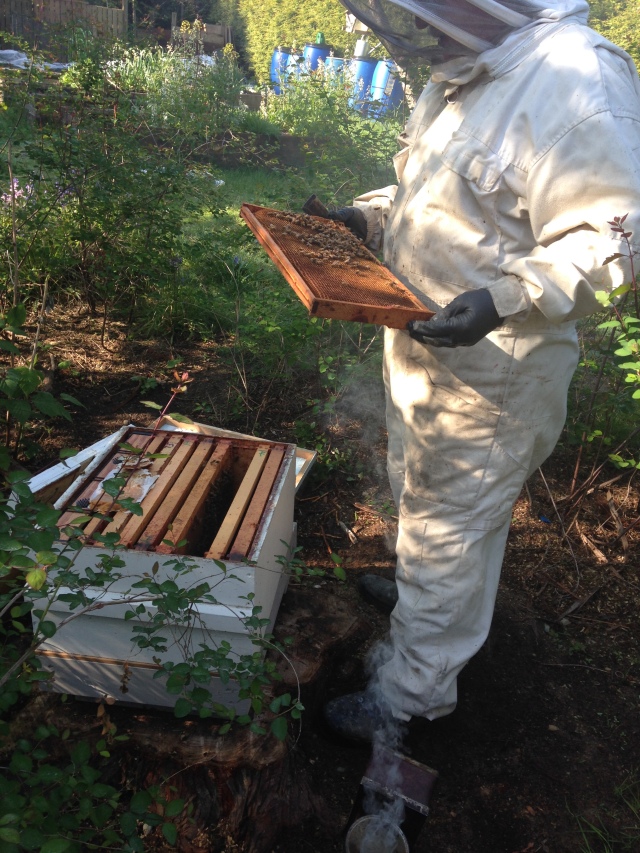 Art checking one of the frames. Very few bees…..

Since the pollination period for blueberries is almost over, we will likely end up with a hive relocated from the Fraser Valley. Art explained that when they replace a hive, they shake out the frames from the old hive a distance from the new hive. Some of the bees will then go to the new hive and others will just get disoriented and die. This apparently eliminates the workers who have been laying eggs. I am not entirely sure about this concept so hope one of the bee guys will explain it to me again. 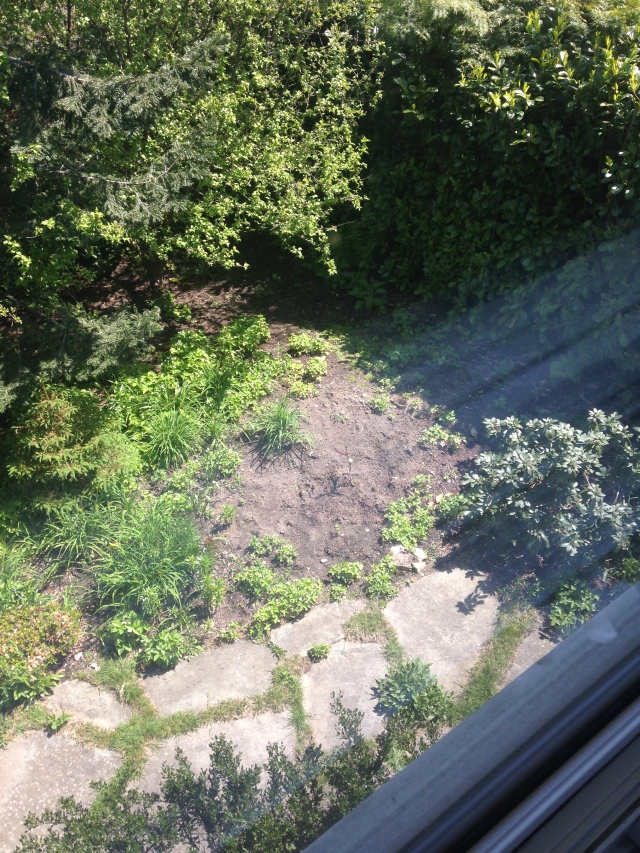 This is a picture of my fig tree from above. The tree is located at the very centre of the bare spot, with a white tag.

I’ve been planning to buy a fig tree since the fall and several months ago I ordered an Italian honey fig through David Hunter. When I went to pick up my fig tree in March, I was expecting the tree to be similar to the apple and pear trees that I bought last year, which were about four feet tall and had lots of branches, so was disappointed to get a one foot tall chopstick. You can see from the birds eye view, that I have big expectations for the chopstick. 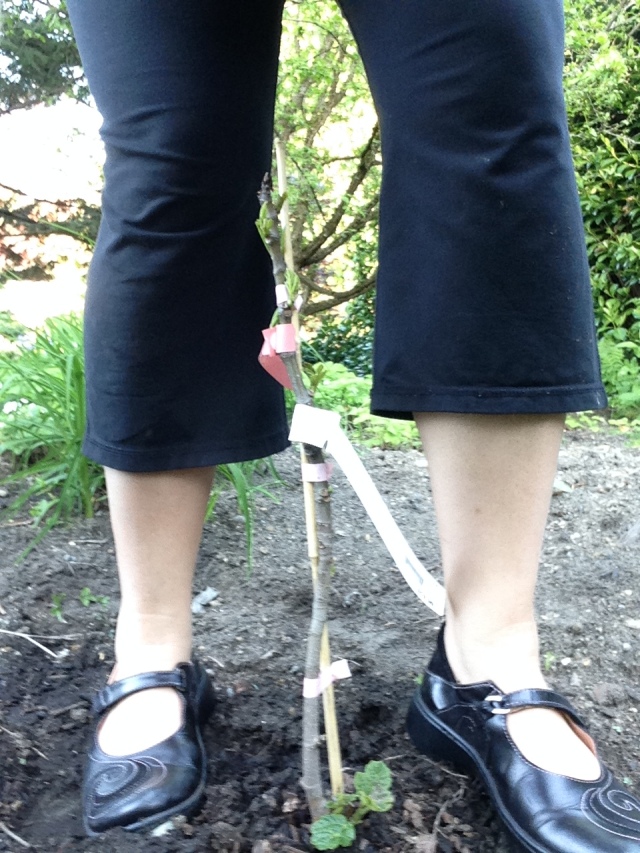 Here is a picture of me standing next to the tree which I took to send to one of my  super-gardening girlfriends who sent me a picture of herself next to her new fig tree. Her tree is also an Italian honey fig species, but is the same height as she is (5 foot 3) and has leaves and baby figs. Already. No, it isn’t like I am totally jealous or anything. She also bought an olive tree, which I am tempted to do myself, but am going to see how hers does this year first as I am still scarred by the death of my carefully nurtured Mayer Lemon Tree two years ago.

And speaking of gardening failures….95% of the seeds I planted in late March were eaten. There are a few surviving sprouts in each row of swiss chard (2 sprout), parsnip (5 sprouts) and kale (1 sprout). Yesterday I reseeded each of the rows with the hope that the warmer weather will give the seedlings an advantage over the slugs. I also purchased some kale and lettuce seedlings to keep things going while I wait for the new seedling to sprout. It feels a bit like cheating since those are the easiest things to grow from seed, but since the point of this all is to eat, I am good with it.

At this point in the year, the over-wintered kale has bolted and is now flowering. Even though the leaves that are left on each plant are small, there are a lot of them so I have been pulling up a few plants each day and harvesting the leaves for dinner before throwing the plants into the compost. Although the overwintered beets didn’t do well and the beets are stunted and growing above ground (explain that one to me), they are producing lots and lots of perfect leaves so I have been adding those in with the kale.

This week my big garden activity is to get some support for my favas, which are now a foot tall. Although the seed packet says that favas don’t need to be supported, I disagree with that completely. Once the seed pods form and get heavy, the plants all fall over and take out everything  around them. Each gets it’s own personal stake.

Okay, with that, I am heading back outside. Happy gardening!

1 Response to Second-hand bees, the fig chopstick and early season support for favas