One of the first raspberries of 2015

Raspberries are my absolute favorite fruit. I devote more time and effort into caring for my raspberry bushes than any thing else in the garden. The first raspberries started to ripen earlier this week, but I didn’t see my first red one until today (someone else was eating them). It’s been a very hot, dry month and the bushes are full of flowers, bees and immature berries, so I am hoping for an abundant crop this year.

This has also been an incredibly busy month with the garden and with life in general. As one of my friends said “May is the new June!”, so I have had no time to write about all the hive updates. Several weeks ago Art and Bryn brought over a hive with a new queen bee that had just been imported from Hawaii. They removed the frames from the old hive, knocked the bees into the grass and put the half-finished frames into the new hive. The rationale is that most of the bees will make it back to the new hive except the worker layer, who in the queen’s absence, had been laying multiple eggs in each cell in the queens absence. Although we didn’t see the queen, within a week we could see the new larvae so we know she is active.  In the picture below you can see the honey. 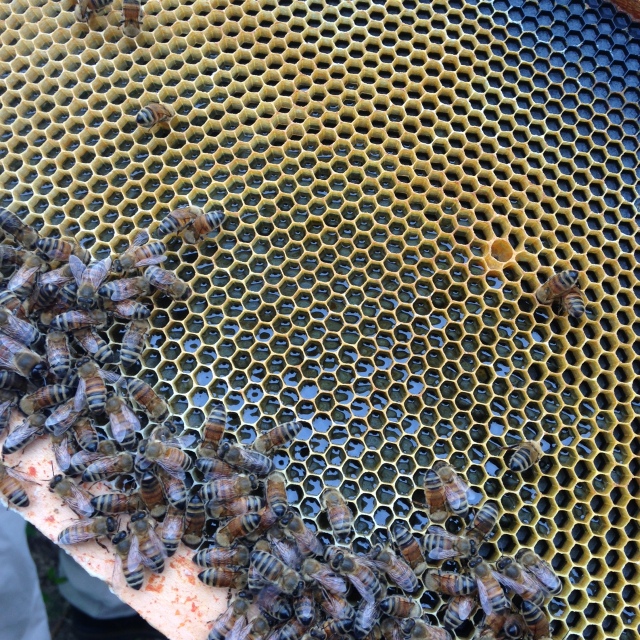 Last weekend Art dropped off a new hive that had been fertilizing Fraser Valley blueberries. This is a SUPER FEISTY hive and every time I walk past it, I get hit by bees and get bees in my hair. Here is a picture of the new hive and a panorama of the back garden showing the relative locations of the hives.

Everything is now growing fast and every day we get to eat spinach, chard, lettuce or kale every day. Over a week ago I planted pole beans, basil, zucchini and cucumber seeds which are being eaten as fast as they spout. One morning I counted 14 cucumber sprouts, and by the next day they were all gone.

Busy weekend ahead of watering, weeding and re-planting ahead….enjoy the sun everyone!