A honey box full of bees. And honey.

The honey boxes were placed on top of the hives in early summer, a few weeks after the bees settled down and we had evidence that the queens were laying. A grill called an “excluder” is placed between the hive and the honey box. The gap between the bars of the grill is too small for the queen to pass through, so she stays below and lays eggs in the cells, while above, the bees fill the cells with pollen and honey. Since the bees fill the centre frames first, Bryn and Art move the frames around every few weeks so that the whole honey box is more or less consistently filled.

To remove the bees from the honey box, Bryn propped the honey box on his trolley then used a leaf blower to blow out the bees (see below). It doesn’t have a bottom or top, just four sides, so the bees are blown straight through to the ground. He removed the individual frames to blow off the last few bees from each. The bees were stunned for awhile and were lying in a big pile, but within 10 minutes they had flown away or back into the hive. 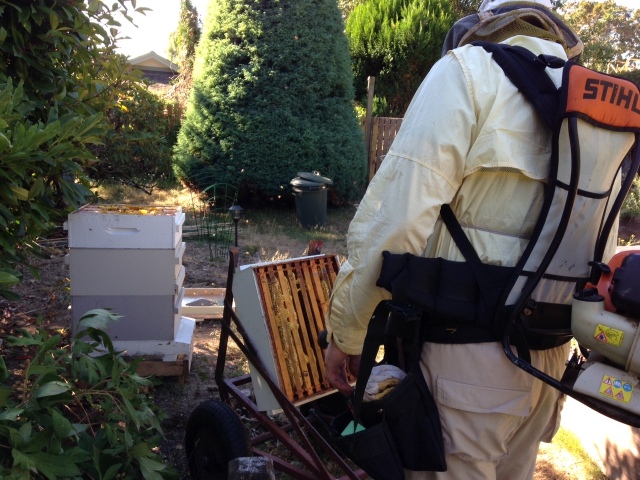 Bryn using a leaf blower to remove the bees from the honey box. The hive at left has one other honey box, and two hive boxes below. The excluder is located between the top hive and the honey box.

A picture of the bee-less honey box is below. Bryn estimates that between the three boxes, the bees have made over 100 pounds of honey. I look forward to finding out if the honey produced was as yellow as the wax.

The numbers on the frames indicate the year that the frame was made (i.e 2013). Bryn and Art make their own frames.

In the next two weeks Art will be dropping by to pick up the hives for the winter. I love having the bees in the garden, so am sad to see them go. I look forward to hosting another hive (or three) next summer. If you are interested in hosting a hive, check out Art and Bryn’s website here, Bring Back the Bees (http://www.3bhoneybee.ca).