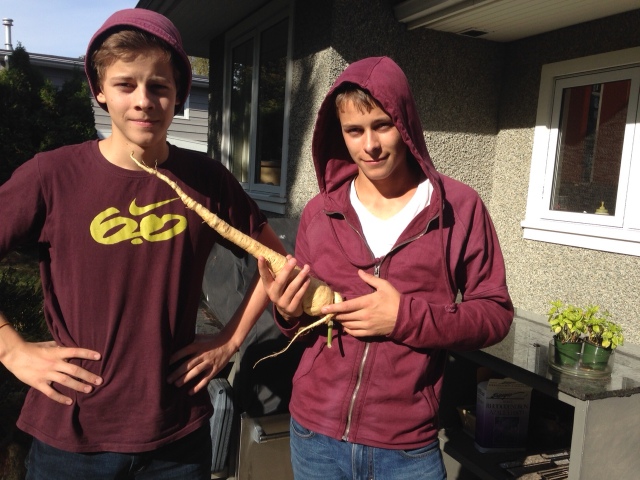 Showing off the giant parsnip

Raspberries infusing in vodka. After 6 weeks in the dark, I filtered the berries out.

6. White begonias and cosmos. Normally I am not a white flower person and prefer something a little more vivid. The white begonias I planted in my planter on the shady front deck turned out gorgeous and perfectly proportioned for the space. The white cosmos I planted last year ended up reseeding themselves across the entire front garden. They are tall and a bit spindly, but I don’t care.

7. Kale and chard…but not too much. This year one row of chard and two rows of kale were just about perfect for our family. I’ve doubled the amount for winter since they grow so much more slowly when it’s cold.

8. Water barrels. The barrels helped our vegetable garden survive the drought. We’re getting more in place before next summer.

Megan’s tomatoes about to go into the oven.

9. Other people’s tomatoes. This was a fabulous year for my friends’ tomatoes. Thank you Megan and Elizabeth for generously sharing your fabulous tomatoes with me.

10. Potatoes, garlic, green beens, arugula, pears and apples…all were abundant and we grew enough to share. This fall I am going to double the amount of garlic planted.

The not so great things…