Most years I pay one of my sons to dig out the compost bin, sieve out the rocks and sticks, and deposit the finished product in plastic bins so that we can spread it around the garden. He’s done this every year since he was 10, except for last summer when he decided that the compost needed more time to break down. This year he did the job in record time and produced the equivalent of nine barrels of fine nutrient-rich dirt. (Really, this stuff is so good you could probably mix it into a smoothy and sell it for $8. But I digress.) After his first day of digging he announced that the compost bin needed to be replaced, and that he was going to design and rebuild it. 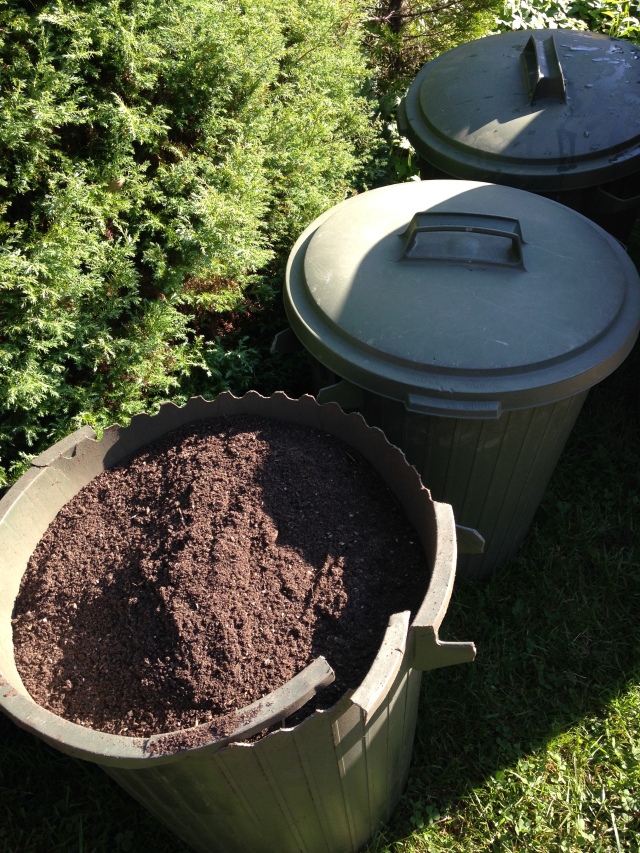 Bins of finished compost….some of these bins obviously need replacement.

In the fine Palaty tradition of father-son compost building projects, Jan and Thomas have already disassembled the bin (see below), have moved all the rain barrels out of the way and purchased all the necessary materials for the new bin. The existing bin is the third that my husband can remember building with his father and once even with his grandfather (who was visiting from the Czech Republic), which puts the average compost bin lifespan at about 15 years.

Looking towards the corner of the property where the new compost bin will be located.

Thomas’s excellent design for the new compost bin is shown below. He has decided to include a covered multi-purpose area for tool storage and for smokers. He has also determined that we have been composting wrong for years and is going to take over as the Compost Boss from now on. (Yes, my proud heart is bursting like a Vancouver rain barrel at the end of March). 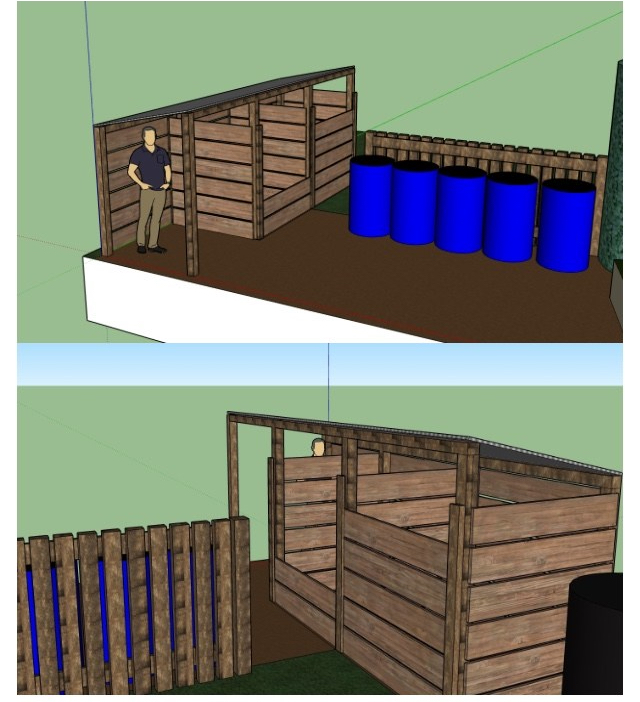 The top view is looking North from my neighbour’s property. The bottom view is looking towards the back corner of the yard. The black cylinder (at right) is where the food compost bin will be located.

This was an exciting week.

A new hive! Despite all expectations, last weekend Bryn dropped off a small hive. The hive only has a single box and the numbers of bees coming and going is fairly small, but we are glad it is here. The timing couldn’t be better as the raspberry blossoms are now in bloom.

Favas! The fava beans are my best success this year so far. They are now blooming and the stalks are growing about an inch per day. I am keeping close watch to make sure that they don’t get covered with aphids again this year.

Many of the other things in the garden beds seem to be doing very poorly. The manure that I mixed in earlier in the spring is different than in past years: it seems to have a lot of straw in it and it doesn’t retain water very well. This weekend I started to top dress the plants/beds with the new compost, in hopes that it will hold the moisture or provide missing nutrients. 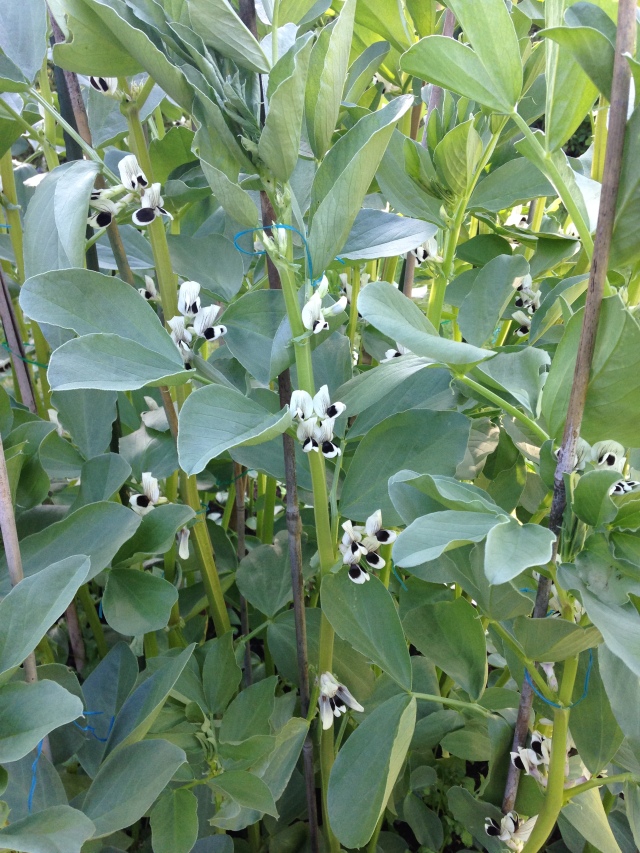 Favas blooming: no aphids yet.

Wildlife sightings – Last evening I was sitting at the back of the garden when I heard something large pushing through hedge behind me. I saw a rough white stripe and I was gone!. Skunk!  Then this morning at 6 am, three racoons were having a fight in one of the trees in our back yard. We saw one fall into a bush, then the three ran across the back and continued fighting in the raspberries. And this past week a mole (or several) moved into my garden boxes. Every morning I would come out to a new pile of dirt around the periphery of two boxes. After replacing the batteries in the mole beepers (they go in the ground and release a high pitched squeak once per minute) the activity seems to have abated somewhat.

Goodbye Icelandic poppies: mostly yellow, with five petals and bloom for about a day, after which you get to look at the naked stalks for the rest of the summer. This year I have been digging them up before they bloom and have been throwing the dead poppy bodies into the garden waste so that the seeds don’t spread. So far I have been fairly successful at removing them.